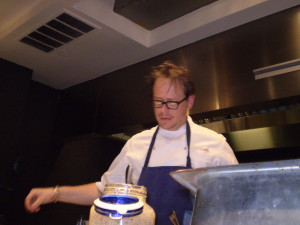 Arguably the biggest restaurant opening of the year, Andrew Carmellini‘s French revivalist brasserie Lafayette has been racking up the star ratings of late. (As ably aggregated by Eater: “Platt gave it two, Sutton gave it two and a half stars, and Cuozzo gave it three.”) This week, the Times‘ Pete Wells knocks the Carmellini love down a peg or two, with a single star review best summed up by the phrase: “I don’t love it.” Mostly displeased about the service–noting, for instance that staffers had trouble pronouncing “simple French words on the menu”–Wells did have some nice things to say about Carmellini’s chef de cuisine, Damon Wise, whom the critic described as an “ace technician.” Read my profile of Wise from his Craft days here [NYO].

“I’m just trying to make wholesome food that people can enjoy at a decent price point. I don’t want to go under the microscope and be criticized for, ya know, my steak stick with preserved tomato. You know what I mean? It’s steak and a tomato, that’s it! It’s just fun to eat and delicious.”