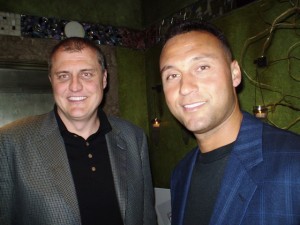 Watch out, Equinox! New York Yankees captain Derek Jeter is partnering with the international 24-Hour Fitness chain to open three new “classy” sports clubs in Manhattan this year. What, you were expecting a Roger Clemens-run juice bar? The first will be a 28,000-square-foot facility on Fifth Avenue, conveniently located just a short guilt-ridden walk from Danny Meyer’s Shake Shack in Madison Square Park. Additional locations are planned for SoHo and also in Midtown, a few blocks from the pro slugger’s own $13 million pad in the Trump World Tower. The healthy and wealthy Yankees shortstop recently took a breather to talk with me about the project.

Let’s put this in terms that everybody can understand–using an analogy from the 2004 comedy film Dodgeball: Is this going to be more of a Globo Gym? Or, an Average Joe’s Gym?

JETER: A what? Globo?

[For the All-Star athlete’s benefit, the central conflict in the movie Dodgeball involves a struggle over real estate, pitting the plucky low-renters at shabby Average Joe’s Gym, which is facing foreclosure, versus the smug, self-loathing muscle-bound jerks at corporate chain Globo Gym, which is threatening to acquire the Average Joe’s building and gentrify the local gym scene.]

JETER: I’m not answering that one.

Read the full interview: “New Gym Owner Derek Jeter: ‘You May Not See Me On a Treadmill’” [NYO]