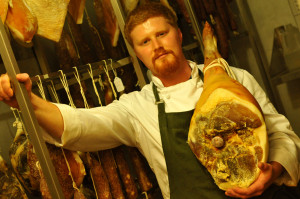 In a fancier setting, sliced meats like these — coppa, mortadella, nduja — would merit a fancier menu heading. Amid the candle-lit smug of your average wine-centric corner bistro, this sort of stuff is commonly called “charcuterie” and it typically arrives served on a wood plank with pickles, olives and maybe, if you’re truly lucky, a tiny shrimp fork to stab yourself with. Here at Baltimore’s Parts & Labor, a former tire depot turned butcher shop and beer hall with a big wood-burning hearth, the language is a little different. You find a lot of similar things: salami, country ham, corned beef tongue. On the menu, though, you’ll find them listed under a quainter title: “From the Salt House.” That’s because the bearded guy with the band saw behind the butcher case isn’t especially fond of the usual butcher-board terminology. “To call it ‘charcuterie’ doesn’t make a whole lot of sense to me,” says P&L’s executive chef and head butcher George Marsh. Read my full article at Food Republic here.